Following the exceptional 3rd Birthday and Memory Box takeover at the Bussey Building with Nightmares On Wax, Farley Jackmaster Funk and Memory Box instigator Robin Ball, we return on Friday 15 April with a LIVE ‘History of Acid’ set from German Acid legends Hardfloor.

Hardfloor are Oliver Bondzio and Ramon Zenker from Duesseldorf, Germany who formed in 1991 as the German acid and techno scenes were just beginning. They released the 9-minute track “Acperience 1" soon after, deciding to inject a bit of bombast into the German scene. This ground-breaking single made their name instantly recognisable to European clubbers. Since then they have released 9 studio albums and multiple remix projects for artists including Depeche Mode, Mike Oldfield, New Order, Mory Kante and The Shamen plus countless remixes of underground anthems like A Guy Called Gerald’s “Voodoo Ray” and Robert Armani’s “Circus Bells”, making them important pioneers of the Acid sound utilising the Roland TB-303.

Your Memory Box host, Robin Ball will also be throwing down his unique style of contemporary Acid warehouse grooves including his own productions (watch out for news on these soon) plus Memory Box bootlegs, retro acid house gems and techno.

Access open to all floors with Throwing Snow playing up above. Don't miss!

Memory Box is a project that celebrates the influences of today’s electronic music scene encapsulating some of the most memorable moments in its time.

A Memory Box party covers the history of electronic club music, hearing its origins from the legends and luminaries whilst exploring the influences the past has on today’s music and how we shape the future.

What is the Handling Charge for?

To ensure tickets are delivered safely and securely and to keep the price as low as possible for you, the ticket buyer, Memory Box generally uses our E-ticket system unless otherwise stated.

For this service we charge a small Handling Fee to cover the debit/credit card processing fees, customer services, processing and distribution of tickets and our secure server costs. We always try to keep these costs to an absolute minimum. If you feel at any time that our prices are not fair or competitive we'd be happy to hear from you.

If you have ordered physical paper tickets there is a further Delivery cost added to cover the delivery of your order through the Royal Mail network.

We always endeavour to keep these costs as low as possible to merely cover the costs of postage. We only charge you one Delivery cost per order so if there is a big group of you recommend purchasing larger amounts in one order.

When you purchase tickets through Memory Box, the full face value of the ticket is shown. This price is the price set by the event promoter and we pay this full amount to the promoter without any deductions. 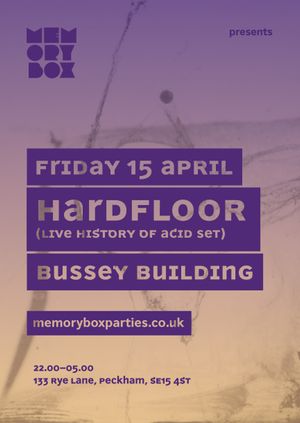 "Memory Box Parties invite artists to play who are integral to the evolution of electronic dance music."